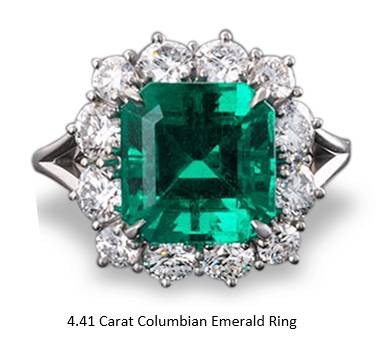 In the past, Investors who depended upon Stock Diversification would look to Recession Proof Stocks such as the best Blue Chip Stocks and the best Dividend Stocks as Portfolio anchors to combat the threat from Market Volatility and Risk. Year after year, they had the safest, best track record of Stock Market Returns. In the past, Investors who might have held Gold as a diversification tool in their portfolio are now looking to other Commodities to generate greater long term returns.

Just as GIA is the foremost authority on Colored Diamonds, American Gemological Laboratories (AGL) is the most prestigious laboratory for Natural Untreated Rubies, Emeralds and Sapphires. Whether these stones change hands privately, through a dealer, or at auction, they almost always have an AGL Certificate of Authenticity accompanying them.
Untreated Natural Colombian Emeralds have for decades been known for their rarity and the ability to hold their value and outperform even the Dow Jones on a consistent basis. They act as a natural hedge against the US 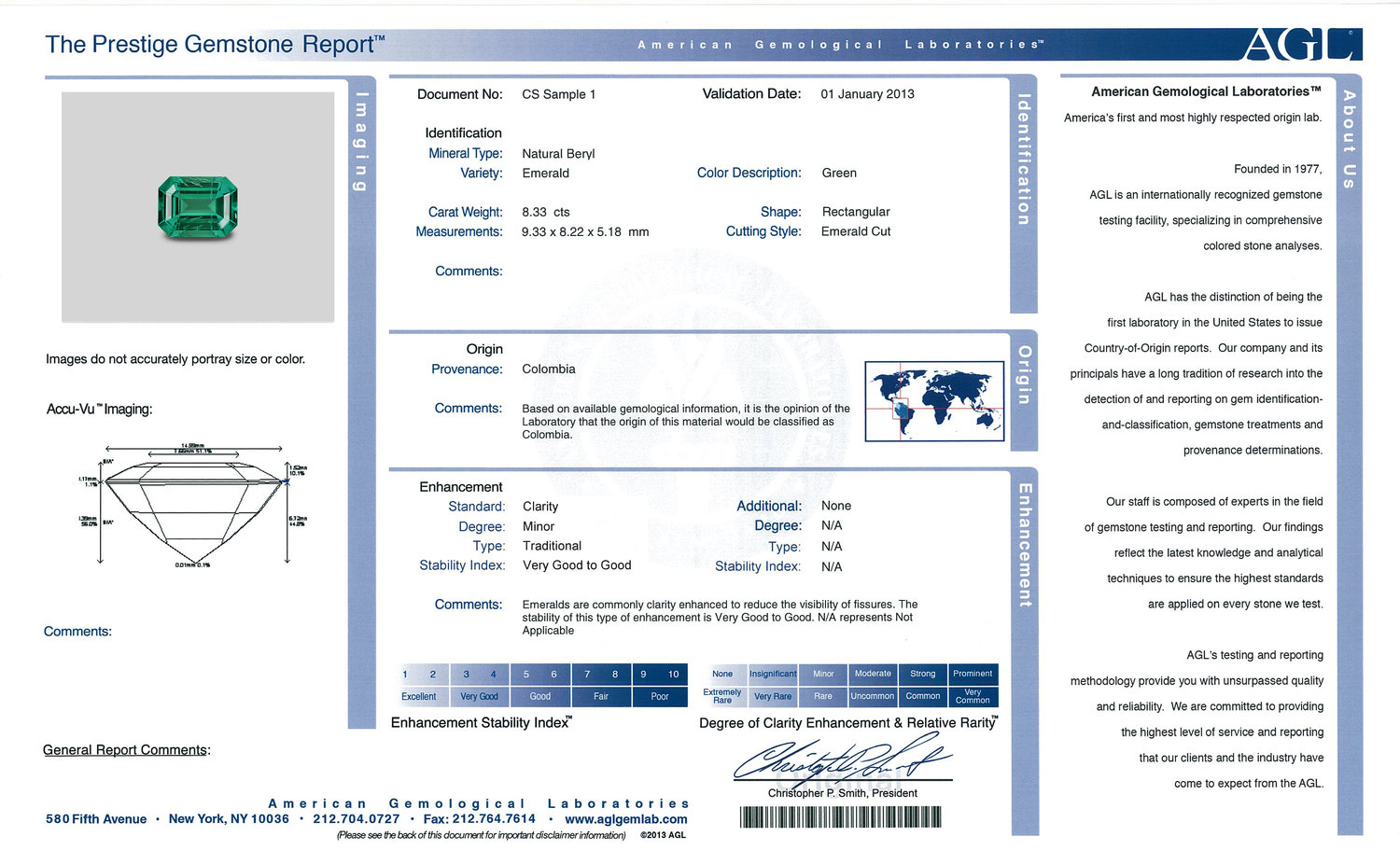 dollar because they can be purchased in one currency and sold in another! Historically Natural Untreated Colombian Emeralds have

increased in value year after year and are an extremely portable form of wealth.

The flagship of AGL reports is known as the Prestige report. It is a full-page laminated report separated into specific sections to present the information in a clear, concise manner, with additional comments for each area of interest. A top report became the “game changer” that levelled the playing field for investors not experienced in the market.

WWW.CHRISTIES.COM
This website provides an expert introduction to Emeralds, from the importance of colour, clarity and saturation to common treatments and favourite cuts. The site is illustrated with fabulous jewels previously sold at Christie’s, and more offered in Hong Kong Magnificent Jewels, May 2019. Auction sales are invaluable because their due diligence of full and true disclosure helps establish the price market for the most rare and valuable gemstones.

Cleopatra and the ancient mines of Egypt
Renowned for their striking color, Emeralds have been a subject of fascination since antiquity – with Ancient Roman nobleman Pliny the Elder supposedly having claimed there is ‘no gem in existence more intense than this’. 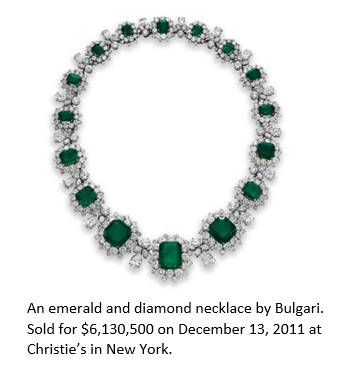 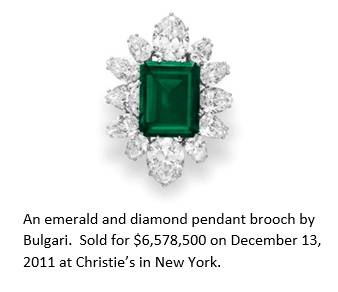 Emeralds were famously adored – and acquired in vast amounts – by Cleopatra, who was so enthralled by the gem that she had her own mines in Egypt, filled with men whose lives were dedicated to finding her jewels. Although few remnants of the original mines survive, the two largest – Sikait and Zubara – can still be found on different slopes of Mount Smaragdus, or Emerald Mountain.

Celebrity Aficionados: Elizabeth Taylor and John D. Rockefeller, Jr.
More recently, Emeralds have been the jewel of choice for celebrities including Elizabeth Taylor – whose Bulgari Emerald Suite sold for $6,130,500 at Christie’s in 2011 – and leading Hollywood actresses including Angelina Jolie. In June 2017 at Christie’s in New York, the Rockefeller Emerald was purchased for $5,511,500. At $305,516 per carat, it broke the price-per-carat world record for an untreated Emerald. 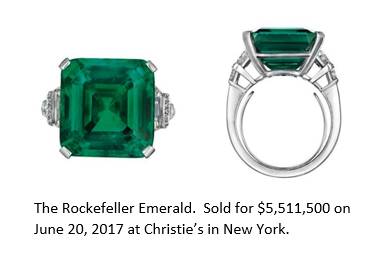 Colombia, the world’s largest supplier of premium color Emeralds
While Emeralds in antiquity were mined in Egypt, India and Austria, the best and most famous Emeralds are found in Columbia – today, the world’s largest provider of Emeralds, responsible for more than 60 per cent of world production. Other major suppliers include Brazil, Zambia and Zimbabwe.

The first of Colombia’s most famous mines, Chivor – named after the Chibcha people who once owned the land – first opened under Spanish control in 1537. Thirty years later, the most prolific Emerald mine in history was discovered 60 miles north of what is now Bogota: Muzo. Muzo has provided some of the most famous Emeralds in history, including the Devonshire – an uncut stone weighing an enormous 1,383.95 carats, named after the 6th Duke of Devonshire, who was given the stone by Emperor Dom Pedro I of Brazil. 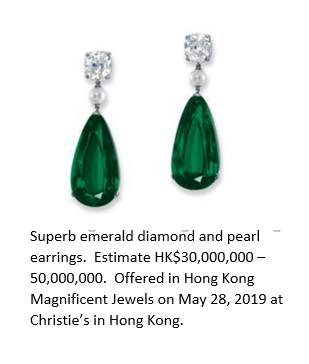 The importance of Color, Clarity and Saturation
When grading gemstones, the degree of treatment is by far the most important criterion – depth of color and clarity come a close second. The most coveted Emeralds possess a verdant green hue, a high degree of transparency and an absence of treatment of any kind!

For a gem to be considered an Emerald, it must be medium to dark in tone – with lighter-toned gems known instead by the species name green beryl. A high saturation of green is also highly desirable.

Inclusions and flaws
Almost all Emeralds feature inclusions and surface-breaking fissures – indeed, it is so common for Emeralds to be flawed that a ‘clean’ stone is said to be virtually unknown. Gemologists call these inclusions jardin, or garden, because they are said to resemble mossy wilderness, ‘growing’ within the stone. 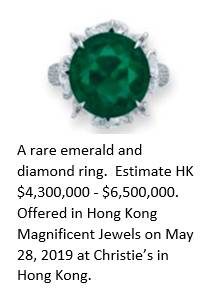 The importance of Color, Clarity and Saturation
The use of Oils and Polymer Treatment
Almost all Emeralds are treated at the mine in order to fill surface-reaching cracks, and to improve their clarity and sometimes their stability. Common treatments include the use of oils and polymers. Because treatment is so common, it is classified on a five-step scale: none, insignificant, minor, moderate and significant. While it is accepted, the degree of treatment substantially reduces value. Untreated Emeralds of similar appearance to a treated stone are priced on a completely different price level owing to their extreme rarity!

The World is seeing a growth in the ranks of newly made and young millionaires, who are on average under 50 years old. These youthful, nouveau riche investors don’t only want to secure their wealth, they want to do so in style. They’re investing increasingly in what are coming to be called “Passion Funds”, long-term investments in tangible and usually rare assets. These investments appreciate over time and are generally safeguarded against unpredictable inflation or market fluctuations. Many youthful investors have seen the damage caused by Stock Market volatility and unpredictability and understand that the Market is no longer the only “game in town”!

Passion Fund goods include fine wines, works of art, collectible musical instruments, as well as rare Natural Colored Diamonds and Gemstones including Emeralds. In addition to guaranteeing high returns, part of the enticement of these niche investments is that they are luxurious, reflect the social status of their owners and offer far less volatility because of the lack of a speculative credit fueled component!

A significant advantage over other Passion Fund Investments is that Untreated Emeralds do not have a limited shelf life, nor are they subject to repair. They are in extremely limited supply and are demand driven. As demand increases every year, prices increase every year! Due to the nature of Hard Assets, they are largely valued for their rarity and limited supply. As one of the world’s rarest commodities, it’s no wonder that Fancy Colored Diamonds, Untreated Natural Emeralds and Rubies are where an increasing number of wealthy investors are choosing to place their trust!

Do you need help?